The Student Guide to the Philly Film Scene

You don’t have to be a film student or a ‘film guru’ to enjoy a good movie every now and then. The Philadelphia film scene is a unique one, so be sure to venture out of your mainstream blockbuster-boasting theater and explore the cinematic scene around the city. There are a handful of famous festivals that come around annually in Philly, so if you have some free time between your studies you can snag a few discounted tickets and enjoy!

Below you can find a bunch of fun, upcoming film opportunities, as well as my favorite thing to do between films; enjoying a nice cuppa’ joe.

Regretfully, as midterms have consumed my life for the past week, I was unable to attend this festival, but don’t panic! There’s still time to watch this one. You have until Sunday,October 30th. The films are being shown at theaters around the city like Prince Theater, Ritz East A, Ritz East B, Ritz Five and URBN Center Annex. You can find the full schedule here.

Coffee Break: Hit up La Colombe around the corner from Prince Theater. After possibly catching a screening of Short Stay or Backpack Full of Cash, make sure to grab yourself a muffin and a cappuccino!

From November 5 to November 19, take a glance at some of the best works in Jewish cinema from around the world that have been presented in Philadelphia for the past 36 years. With venues spread around Philly in Center City, Old City, University City as well as the surrounding suburban areas, you’ll have no problem catching a film conveniently close to you! Not to mention, this festival is (the magic F word) FREE for students, click here for schedule info!

Running through November 10th to the 20th, this festival is one of a kind and first hit Philadelphia in 2008. Some of the main venues for the festival are the International House of Philadelphia in University City and Asian Arts Initiative in Chinatown North. RSVP for your FREE movie events here! 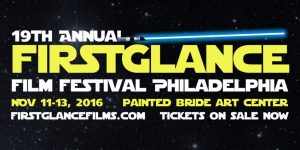 With its co-host, Los Angeles having the festival in the spring, Philly takes over the festival from November 11th to the 13th. Head to the Painted Bride Arts Center for a—you guessed it—first glance at independent films like Virtual Revolution and documentaries like Writers Matter. You can pre-purchase tickets and packages online, or pay cash at the door! For the schedule and more information visit FirstGlance here.

For all of you 21+ film-loving college students like myself, passing up a classy BYO night at a historic theater like Roxy is a difficult task. Every Wednesday after 7pm you can kick back with your favorite bottle of wine and bring your ID with you! Make sure to click here before attending to read all the guidelines of what you can and can’t bring.

On Tuesday nights at 7:30pm, Woodmere’s main gallery section is transformed into the perfect location for screening the classics. There is a $5 suggested donation which isn’t much for such a unique experience. You can catch films like Schalcken the Painter on November 1st and The Good Fairy on November 8th. Full schedule can be found here.

Volunteering is not only a great activity to partake in regularly, but it looks great on your resume and can earn you some cool opportunities! You can volunteer with the Philadelphia Film Society for events such as the Philadelphia Film Festival in the fall and Movies on the Block throughout the summer. You can also volunteer with the Philly Asian Film Festival!