Make the city your campus

CollegeFest is quickly approaching, and we’re beyond excited!  On Saturday, September 7 experience your BEST five hours in Philly.  This year, we’ll have the biggest festival yet in Dilworth Park, featuring exhibitors with prizes and giveaways, pop-up performances, outdoor games, and so much more

CollegeFest is all about introducing you to your extended campus, the city of Philadelphia, so in addition to the huge party at Dilworth Park, we’re also partnering with museums and attractions all over Philly that you’ll get to discover for FREE.  That’s right!  If you’re a current college student, register today for Express Check-In  so you can skip the line at Dilworth Park (next to City Hall) on September 7, grab your wristband and check out these attractions for F-R-E-E! END_OF_DOCUMENT_TOKEN_TO_BE_REPLACED

Get ready, Philadelphia—we’re welcoming in the Year of the Pig with a big celebration at the Rail Park! In collaboration with Philadelphia Chinatown Development Corporation, the Friends of the Rail Park invite you to enjoy an afternoon of food and cultural activities for all ages that celebrate the diversity of what our communities have to offer. Entrance is free. Food for purchase.

Veterans make up roughly 4 percent of the college student population, and in 2013-14 alone, over one million veterans received education benefits through the U.S. Department of Veterans. But the road from military to college to professional can be a rough one, with veterans figuring out how to transfer the skills they learned on active duty to the world of higher education and then to the fields of business, finance, healthcare, and more. The Travis Manion Foundation, based in Doylestown and San Diego, recognizes the unique challenges that veterans face in transitioning from military to civilian life and provides resources that veterans, and especially student veterans, should look to take advantage of.

The Travis Manion Foundation was started to honor the memory of 1st Lt. Travis Manion, United States Marine Corps, who was fatally wounded while helping and drawing fire away from his wounded comrades in Iraq in April 2007. The organization’s mission is to assist our nation’s veterans and  families of fallen heroes, through several  multifaceted and far-reaching programs.

One such program that would be of direct interest to student veterans in Greater Philadelphia is their Mentor and Advocacy Program for Veterans (MAP-V). Designed specifically for post-9/11 veterans to assist in their transition from military to civilian life, this program is a ten-month, two phase program comprised of seminars, mentorship, and a fully-funded internship program that helps veterans set out onto a fulfilling career path. Hugo Lentze, Program Manager of the Mentor and Advocacy Program for Veterans in Doylestown, describes the story of one veteran’s path from military to law enforcement.

“We have a veteran who is interning in a local law enforcement agency. He came into our program with an ineffective resume and was not really able to articulate his experience and why he wanted to go into law enforcement. We helped with his resume, and I remember him saying ‘Wow, I did some cool stuff!’ We also helped him with interviewing, putting him through four iterations of practice interviews, and we were able to find him an English grammar tutor for the sheriff’s exam. He boosted his score on the exam more than 20 points to 97%, and did very well on his interview. He is now in the final stages of being accepted for a position,” explains Lentze.

The internship and career path of each veteran is unique, but the MAP-V program benefits are the same for everyone who is accepted. Participants meet twice a month for personal and professional discussion seminars, and receive support in the form of resume and cover letter editing, mock interviews, and personalized career support as needed (as seen in the example of the English tutoring for the sheriff’s exam). During the second half of the program, participants complete a 16-20 hour/week internship. Internships have ranged from working at a real estate agency to teaching at environmental education centers, all based on the veteran’s career interests. At the end of the program, the veterans are career-ready, having both professional experience and the ability to articulate their unique skills.

Interested in participating in the MAP-V program? You can fill out an application here. Applicants must have served a minimum of 24 months (unless serious injury prevented further service) with an honorable discharge after September 11, 2001, and must no longer be on active duty or serving with the National Guard.

But, as Lentze says, “student veterans need to understand that the Travis Manion Foundation is more than just the Mentor and Advocacy Program for Veterans.” Other programs include the 9/11 Heroes Run 5K Race Series, Survivor Services, and the Character Does Matter Program. The Character Does Matter Program connects the heroes of today — veterans, active duty personnel and families of the fallen — with the leaders of tomorrow.  The purpose of the CDM program is to inspire young adults to live with character, develop their values-based leadership skills, and activate them to serve their communities in honor of our nation’s fallen heroes.

“Everything we do in the Foundation embodies the ‘If Not Me, Then Who…’ mentality” says Lentze, referring to the crux of Travis Manion’s beliefs about the notion of service. Service is at the core of what the Travis Manion Foundation stands for, and in doing their work, they assist both the community of veterans and the community of civilians at large. So whether they’ve just ended their active service or they are a couple of years into college, student veterans can turn to the Travis Manion Foundation to make their career path smoother and make a real difference in their community.

So you’ve probably been hearing a lot from us about CollegeFest recently (I mean, it is the coolest party happening this whole year) and maybe you’re still deciding whether you want to go. So we decided to tell you why CollegeFest rocks from students like you. Check out the best stories from last year’s CollegeFest and get excited to meet new friends and meet Philadelphia on September 12 at Dilworth Park! RSVP on Facebook to let us know you’re going. 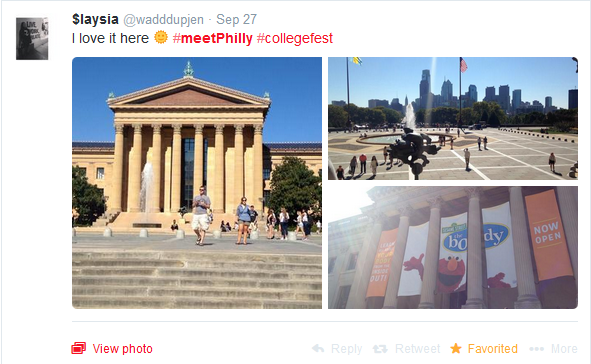 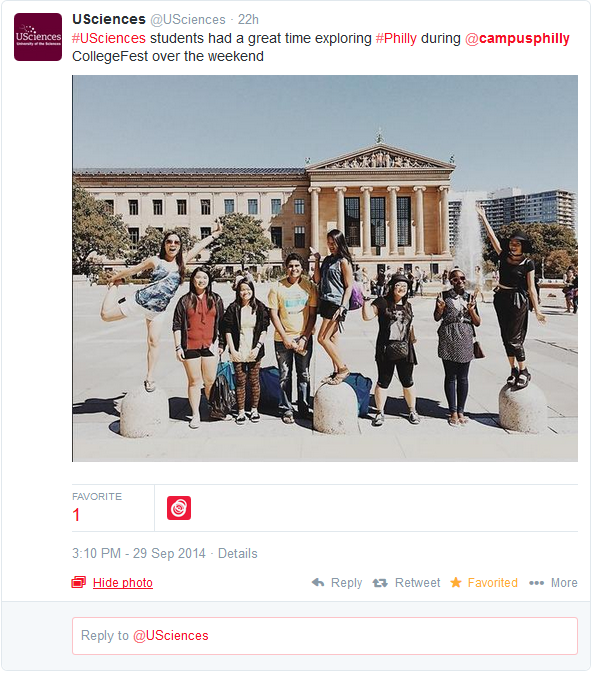 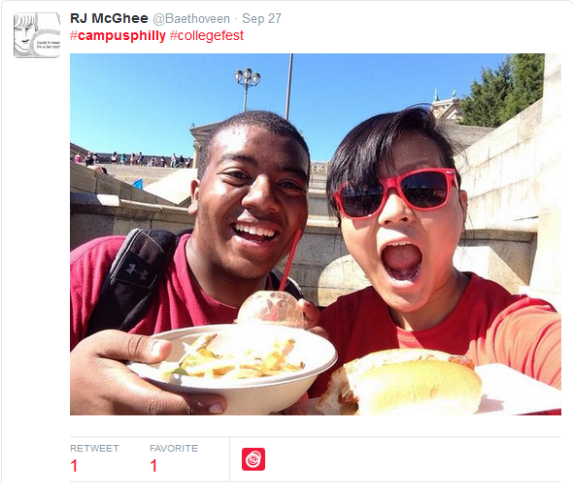 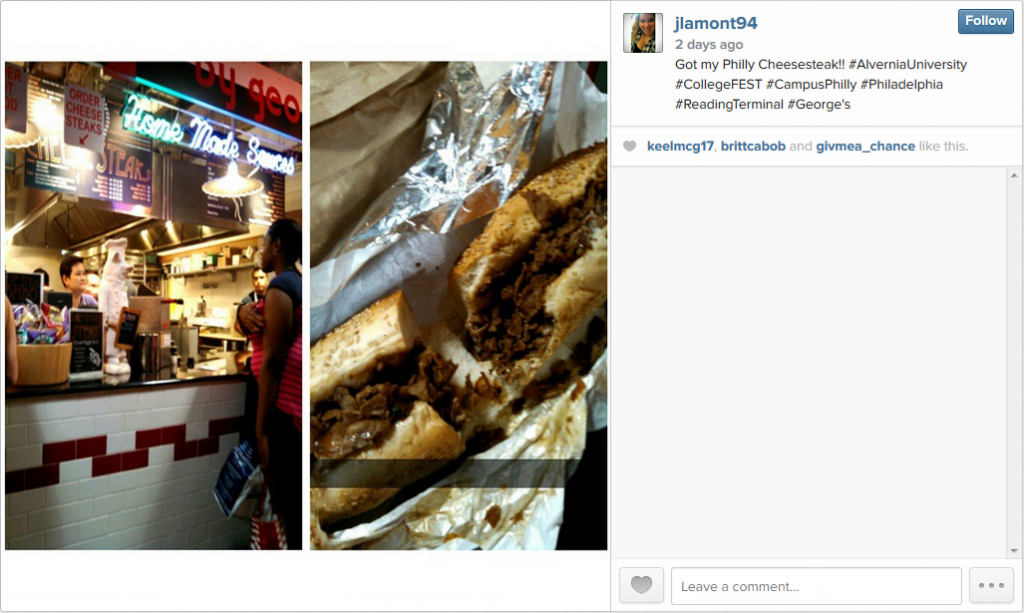 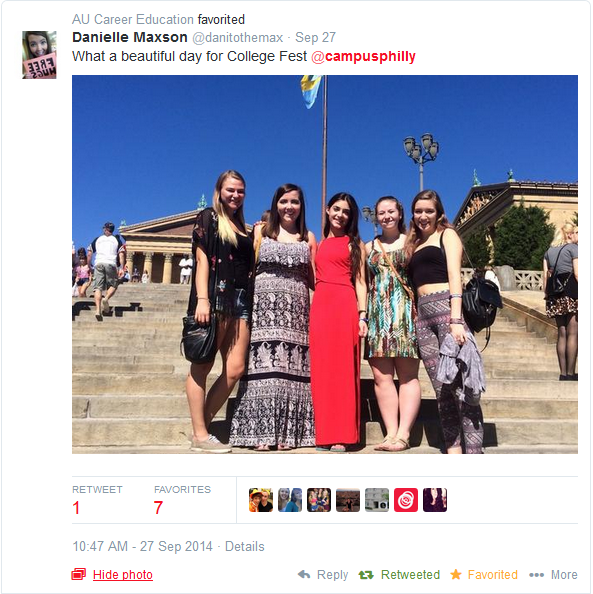 Philadelphia is a city thriving with art, and as a student you should immerse yourself in as many creative experiences as possible. Whether it be visual art, dance, theater, or music, there are so many opportunities to engage in the arts community first-hand. In the summer months, art exhibits of all types are held more often and are typically held outdoors in the welcoming weather. The best part of these events? They fit a college students’ budget, as most of them are free and open to the public. Here’s a list of some exciting chances to engage in different events in the art community of Philly this week!

Pasion y Arte Flamenco is the premier all-female flamenco dance company in Philly and will be presenting an hour-long, interactive, and fun dance performance on the outdoor porch of 30th street Station. The entertaining performance will include a brief history of the Flamenco dance, Flamenco dancers and musicians from the company, live music, and an invitation for audience members to join in the Flamenco dancing and have fun.

Fleisher will be holding its annual community arts festival ARTspiration!, which has become so popular it is often attended by more than 2,000 people. This free event that was started in 2007 will be held on Catharine Street right outside Fleisher’s historic campus. This festival will cater to all ages and offer a look into the creativity and art that is so present in Philadelphia. Activities include music and dance performances and art-making activities led by local artists.

The 8th annual West Park Arts Fest will be held at the West Park Cultural Center and celebrate different cultures and the diverse community of Philadelphia through music and dance. The celebration will include outdoor singers and performers, cultural dance groups, and activities for children such as arts and crafts under a pavilion.

Graffito Works is an interactive, site-specific dance performance that is open to the public, and is choreographed and directed by Steven Weisz. The on-site dance will show audience members a collaborative and thoughtful work as the dancers improvisational skills are shown through their interactions with each other, the site, and objects around them.

The scenic and nature-oriented Schuylkill Center is hosting their Open Spaces outdoor arts exhibition. Nine artists will present their work both indoors and on the trails of the Schuylkill Center. These artists spent three days creating their work in public, some artists creating string and ribbon sculptures, and leaving their creative processes visible to audience members. The event will also hold a reception to celebrate these talented artists and offer light refreshments in the gallery, along with a guided walk to the outdoor works.

For employers, college staff and others (monthly)